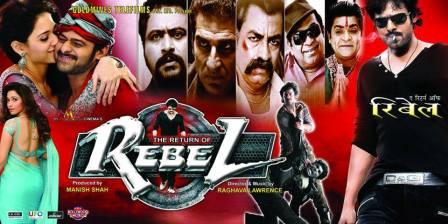 Synopsis: Rishi (Prabhas) is a happy-go-lucky son of Bhupathi (Krishnam Raju). Rishi is influenced by his father’s ideals and grows up just like his father. But Bhupathi doesn’t want his son to take up violence and make more enemies like him. He sends his son to Bangalore for studies and to learn music. There Rishi falls for Deepali (Deeksha Seth), an orphan and brings her to his house in the disguise of his old music teacher as he wants his father to be happy that he doesn’t take up the violence. During the festivals held in their village, Simhadri (Pradeep Rawat), sends 100 thugs to kill Bhupathi and his family. Rishi saves his father by eliminating all the thugs. Bhupathi’s brother (Mukesh Rishi) joins hands with Simhadri, so they can kill Bhupathi, Bhupathi’s wife, and Deepali in a temple. Simhadri tells Rishi that a local goon helped Bhupathi’s brother kill Bhupathi and his family. Rishi wants to destroy Bhupathi’s killers, but Simhadri kills himself. In a rage, Rishi stabs Simhadri’s corpse more than once. Raju (Supreet) is one of Bhupathi’s bodyguards. Some of Bhupathi’s bodyguards are still alive. Raju and the other bodyguards assist Rishi to get revenge.